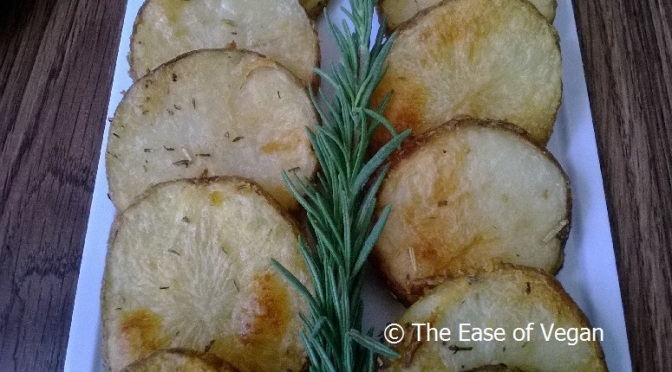 Here’s a healthier version for those wishing to get their crispy potato fix.  It has much less salt than the deep fried version popular at fast food outlets.

The potatoes are parboiled, then roasted to give it that crispiness on the outside while remaining soft and tender on the inside.

– Pot a large pot of unsalted water on to boil

– Place in boiling water, cover and let cook for no more than 5 minutes.  After cooking, potatoes should be soft around the edges but firm in the middle

– In a large mixing bowl, add potatoes, dried Herbs de Provence, onion powder and olive oil.  Carefully toss together until potatoes are evenly coated and a starchy coating begins to appear on the faces

– Next, sprinkle salt over mixture and toss again to ensure even distribution

– Evenly spread potatoes, face side down, on baking sheet

– Roast at 450 degrees Fahrenheit for 25 minutes

– Carefully remove from oven.  Potatoes should look like this:

– Carefully flip each potato round over

– Put back in oven and continue baking for 30  minutes.

– Carefully remove from oven and place in serving dish/tray.